Fablehaven III - The Grip of the Shadow Plague 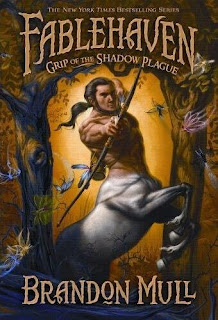 Way to Go Brandon Mull! This one is my favorite in the series so far, and has me chomping at the bit (no reference to the centaur on the cover) to read book 4 due out in a couple of months. In this book, it becomes apparent just how involved and interwoven the plot is. Back story is introduced and interwoven in the plot in a way that I think is very original, and is actually my favorite thing about this book. I want a prequel that goes way back before the Sorensens were caretakers now!! More Patton! Of course, with how the backstory has become significant, I'm sure we'll be hearing a lot more about it in the upcoming books. Maybe when he's done with the series he can go back and write some prequels? Also In this book we get a look at other organizations, preserves, etc, with more mythical creatures that are appropriate to the culture where the preserves are, which I thought was great - Jackalopes, Kachinas, etc. Awesome. Plus the characters really seem to have come in to their personalities in this one - in the first book, Seth seemed flat and shallow, for example. You see other sides to his personality in this book and he becomes a real person to me, and this is true across the board. Really this book leaves me with no complaints.
As far as the audiobook is concerned, the reader also seems to have come in to his element in this one. Maybe it's because by now I'm so used to him that I don't notice him at all, or maybe he's doing a better job. There are numerous character voices and accents introduced in this book and he's believable and consistent. So all around I'd give this one a 10 - giving Harry Potter a serious run for his money (or Jim Dale and JKR since Harry doesn't actually get paid)
Nice job Brandon Mull!
Posted by Mike's Woodwork By Design at 7:41 AM No comments:

Fablehaven II - The Rise of the Evening Star, by Brandon Mull 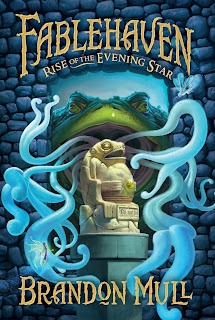 I figured this would be the book that would make or break the series for me - the first book was fun, and original, but either Brandon Mull would get stuck in a rut and run out of new ideas, and become trite and run-of-the-mill, or he would pull another great story out of his mind with new ideas and more excitement. Turns out that not only did he pull it off, he did it with splendor. His original fantasy world is more believable, more rich, more complex and interconnected than I had hoped, with rich characters, interwoven plot threads, and a greater story than just the plot of each book, and yet each book stands alone as a great story too. I especially liked the inverted tower part of the book - I've had a recurring dream that I wanted to make into a story where I had to go up against evil creatures to overthrow the big bad guy at the end of several challenges, each more life threatening, and each deeper under ground in an inverted tower, and thought to myself that it would make a great story. Thanks, Brandon Mull, for writing the story for me!
As far as the audiobook is concerned, the reader's performance leaves less to be desired than the first book - more voices, more characters, more accents, and less overblown enthusiasm. If you're not hooked on the series after the first book, you should be after this one. I think it's great. 9 out of 10 all around! 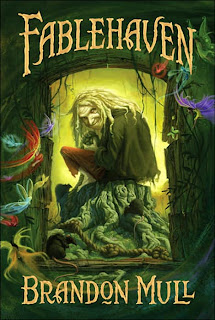 I was pleasantly surprised by this book. It was published through Deseret Book-affiliated companies, so I figured it wasn't good enough to get picked up by a larger, national publisher. My son read the series, as far as it has been released, and was nuts about it, so to be honest, I kind of wrote it off as a kids' story. Then Liz read it and said it was good so I gave it a go. It was much better than I was expecting. I was expecting characters with no depth and a contrived plot that just follows archetypes of fantasy literature, and what I got instead was a unique fantasy world that, thought it has your normal mythical creatures in it, does it in a fresh, new way, and with characters who are pleasant, believable, and interesting. I give the story a 9 out of 10.

The audiobook is not quite up to what I would like. The narrator puts a little too much enthusiasm into his inflection, making it feel every now and then like he's reading to young children. His voices, though, are good, and for the most part, doesn't detract from the story. I'd give his narration a 7 out of 10, for a combined score of 8 out of 10 for this audiobook. It's worth the money.
Posted by Mike's Woodwork By Design at 11:38 AM No comments: