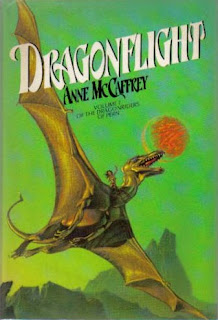 I started reading this series of books in Middle School. The author calls them science fiction, but really I think they have a lot more in common with fantasy - it takes place on a world colonized by earth, but that lost contact thousands of years before. Without modern technology, an agrarian society with the apprentice system is set up. Dragons are basically indigenous creatures that people team with to protect from a sort of deadly rain that comes around every 200 years... Sounds strange huh? They're fun books though. Anne McCaffery was the first woman to win the Hugo award because of this series of books, the Dragonriders of Pern. I enjoy the theme of rediscovering as the characters unearth more history and background - something that always makes books more interesting to me. The characters are fun and well written, and the dragons are dang cool. You can't help but want your own. I think part of my fascination with dragons comes from these books, and they're the standard against which I hold dragons in most other fiction. Christopher Paolini appears to have been highly influenced by the dragons in these books, for example.

The audiobook is good - Average production quality, no silly special effects or anything. As far as rating where children are concerned, again, probably PG-13, though not as much as Treason, the last book I reviewed.
Posted by Mike's Woodwork By Design at 1:58 PM No comments: 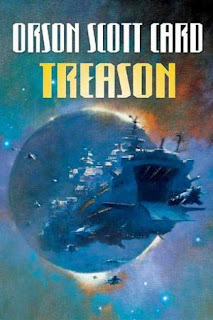 "A Plantet Called Treason" was one of the first books by Orson Scott Card, and he later went back and edited it and published it again under the title, "Treason." I read this book as a teenager, before I knew who Orson Scott Card was. Every now and then as an adult I would try and remember the title of the this weird book about a planet where scientists were abandoned to pursue their area of expertise with their families, all of whom separated into clans, and bred/developed their knowledge till the genetecist could heal like Wolverine, the geologist could mold and shape stone, the demagogue could create the illusion of themselves as other people, the physicist could control the rate of travel through time around themselves. This is the background to the book. A few months ago it came back to mind, and I rediscovered the name and author of the book, so I decided to get it.

It's been a long time. Unlike most of Card's work, this book is more adventure and action and a plot that is physically interesting, instead of the psychological drama of the Ender quartet, or the political and intellectual intrigue of the Bean quartet. This one moves along and is fun. It's also quite interesting as far as a thought study on these powers people could develop if...

There is some sensuality in the book, though not explicitly sexual - more than I would like my 11-year old son to be exposed to, so I would suggest a strong PG-13 rating as a book.

The audio production is fine - one of the people who reads the Ender and Bean saga reads the whole book, as it's told from first-person perspective. All in all, a pleasant, intersting book. I'll give it 7 out of 10.
Posted by Mike's Woodwork By Design at 2:32 PM No comments: