Mistborn 3 - The Hero of Ages, by Brandon Sanderson 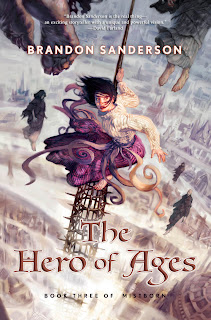 Brandon Sanderson did it again - not a disappointing end to the Mistborn Trilogy at all, and it's been the most exciting fantasy series I've come across since Harry Potter and Twilight. I'm usually pretty good at anticipating things, enough that a lot of stories seem predictable to me. I had lots of theories and predictions about this book, how it would wrap up the series, and they were, without exception, wrong! Which I think was awesome. The only author I've discovered who compares in his/her ability to interlink plot details, have unexpected twists, etc. is J.K.Rowling, and I can't give Sanderson much higher praise than that. Some of the things that happened gave me big AHA moments that were lots of fun.

As with the other books, the action is awesome. Allomancy is cool, and the battle sequences are awesome. You learn too about more about Ferrochemists and also about Hemalurgy, which is all unique to these books. Some of the details get a little macabre, so probably still PG-13.

I also love the characters in these books. They seem so real to me, with well developed personalities, and also with personal struggles and developments. This book especially shows Sazed and Elend as they deal with things that test their metal (haha - metal - ok so not funny unless you've read the books). As with the other books, the setting, subject matter, and way things are handled is original and amazing. Pretty much the only other thing I can think to say without spoiling anything is that you won't be left with much of anything unresolved in this one - only enough for Sanderson to someday write sequels, but they aren't needed to wrap up the series.

Top marks again for this one. Way to go, Brandon Sanderson, and thanks to Paul and Danny for recommending this series to me!
Posted by Mike's Woodwork By Design at 10:11 AM No comments:

The Well of Ascension - Mistborn 2 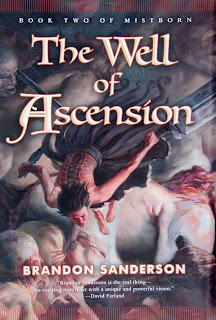 Whoah! Yeah. Whoah. Not at all what I was expecting in The Well of Ascension by Brandon Sanderson. At all. If the first book of the Mistborn Trilogy, The Final Empire, hung on to fantasy genre stereotypes by a thread with an older mentor and an orphan hero with magical powers, that thread was cut completely as this book got going. Awesome story. As is often the case with trilogies, this is a darker story than the first, but full of unexpected twists and quite different from anything else I've ever read. The themes of betrayal, trust, love, belief, and friendship that were so important in the first book are back, the characters get more interesting (as if they weren't already so dynamic in the first book) and the things that happen, well, not at all what I was expecting.

One thing I have enjoyed a lot is the relationship/romance at the middle of this story. The romance doesn't take over the story like it kind of does in Stephenie Meyer books, or be simplified and silly like in Eragon and Eldest of the Inheritance trilogy, but is still critical to the plot, and the difficulties they have to overcome are, to me, very easy to identify with - thoughts about whether they deserve each other, each one trying to make self sacraficing decisions because of what they think is best for the other, etc. And it meshes seamlessly into the overall plot for a combined effect of me not being able to wait to find out what happens next.

As far as a production goes, I'm used to the reader now, though he's still no Jim Dale. I give it 5 out of 5 for story and 4 out of 5 for audio production for a 9 out of 10 total. The first book had some gore and violence that made me say early teen for age appropriateness. This book has a little more mature content including a libidinous bad guy so still probably PG13 or so.
Posted by Mike's Woodwork By Design at 1:33 PM No comments: 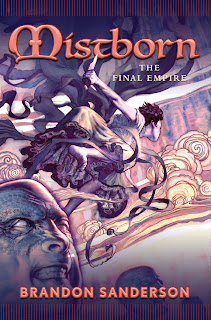 I had heard good things about "Mistborn: The Final Empire and its sequels from my brothers, so I went into the experience with fairly high expectations. I think I got what I was expecting. It's not so cookie-cutter like a lot of fantasy is. Brandon Sanderson starts off with the question "what if the epic hero who was to overthrow the evil before it took over the world failed in his quest?" A thousand years later the world is not so pretty a place, and people are enslaved to the ruling class, and THEN a hero arises. That in itself wasn't enough to make a totally unique story line - it ended up kind of like Star Wars episode IV in some respects - you have an orphan hero who is awaken to latent powers the average person doesn't have, who rises from obscurity with a more experienced mentor who has suffered great personal loss to the evil ruler. So the basic framework is similar, but I was still pleasantly surprised with how it all came together. I think what made it more unique is the kind of powers this centers around - rather than your typical magic or dragons or the force or other such run-into-the-ground powers, this book centers on Allomancy - certain people can ingest metals and use powers the derive from them - some can have great strength, others hightened senses. Some can influence emotions, some can push or pull metals, and some can do all of it. That's just not something I've seen before, so it made it cool.

The audiobook production is not bad. I wasn't a huge fan of the reader at first - his tone seemed like he was trying to sound dry and witty all the time, but I got used to it pretty quickly and settled in to enjoy the story. He doesn't detract from the story like some do, but doesn't really add to it either. Still, all in all, an enjoyable book - probably 8 out of 10.
Posted by Mike's Woodwork By Design at 8:02 AM No comments: