Children of the Mind - by Orson Scott Card 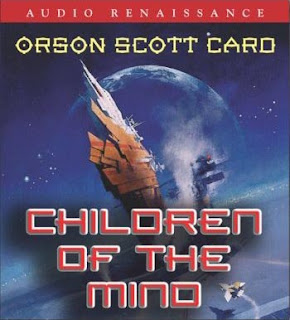 Other than Ender's Game, this is my favorite of the Orson Scott Card books that I've read. Of course, that would be like saying that Return of the King is the best of Tolkien's books - neither book stands alone and is only great because of the earlier books in the series that build up for it. This book is a lot of fun though. It neatly wraps up the Ender story, it deals mostly with the death or survival of one of my favorite characters (Jane), and keeps going with the nature of the soul and faster than light travel and all that that is developed in Xenocide. Still, remember the frog in hot water analogy - in Ender's game it all seems pretty normal - not a far stretch. By the time you get done with this book, you'll have swallowed a romantic storyline involving a guy who is simultanesouly in love with a disembodied genderless soul existing in the computer network and a soul-less woman body operated from a distance by a man's soul--yeah, it's wacko, but somehow it seems not so wacko in the storyline. Makes me laugh, but somehow Card pulls it off and makes it quite interesting and entertaining.

The audio production is great - adds to the story nicely, making this a great audiobook.
Posted by Mike's Woodwork By Design at 10:45 AM No comments: 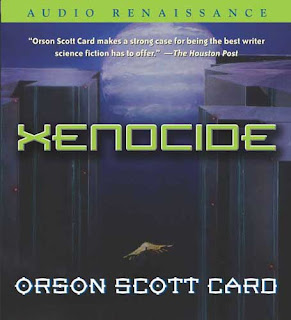 For me, Xenocide is a fun book. It's like the parable of the frog in cold water that will stay in while it heats up - the science fiction starts out pretty easy to swallow in Ender's game, and gets deeper and deeper through Speaker for the Dead and now Xenocide. It's off the charts in the next book. The thing is, I like where Orson Scott Card took it. He talks about philotic physics in Ender's Game, and again in Speaker For The Dead, but only as a way of communication. In this book, he delves deaper into it, including discussion on the nature of life, faster-than-light travel, the nature of the soul, unity or one-ness, and other things like that. The thing that I find secretly entertaining about it, though, is that what he's actually done is use some obscure Mormon scripture references about the nature of truth and intelligence and matter and make them a basis for the science fiction in the book. He says he wasn't serious about it, that it was just having fun, and that's what it is. I read criticism that he makes some logical leaps that remove it from real physics and put it into metaphysics, but honestly, it's fiction, people, and the grasp on physics as we know it was thrown away for Ender's game, let alone any sequels. What he has done, in my opinion, is make a universe where instant communication and travel are possible within the logic and rules of science in that universe, and where there's a scientific basis to believe in the soul.

There is a storyline in the book - a few characters on a parallel world with Chineese culture - that bogs down for me a little, but fortunately, that is dropped after this book and the next one focuses on the root of the story, except for one character who comes from that world who is central to the next plot.

SO I enjoy it, and it sets the stage for the next book which is also very fun, and wraps up the whole rebellion of Lusitania, and impending death of Jane storyline quite well.
Posted by Mike's Woodwork By Design at 9:31 AM No comments:

Speaker for the Dead - by Orson Scott Card 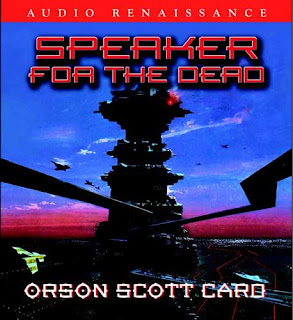 I really like the audiobook production of Orson Scott Card's books. They have probably 6 or 8 different readers, and it alternates between them depending on whose perspective the story is being told from at the time, and it has the effect of giving real voices in my mind to the different characters. No cheesy sound effects, and unabridged, and read very appropriately without overexcitement, and yet without monotone.

As far as the story, this is heavier science fiction than Ender's Game - I like to tell my kids that the aliens in it are called buggars and piggies. They think that's pretty funny. Though it is a sequel, it is a completely different story, more removed than, for example, the Lord of the Rings is removed from the Hobbit. Still, no laser guns, no sex with aliens, no green goo, none of the things that science fiction is made fun of for, it's more like historical fiction set in the future, and involving aliens. What I like about the book is that it is about discovery - the discovery of a family's secrets that have been causing pain until they get exposed and dealt with, and the discovery of the thought and culture of an alien species that was not understood at all, not because the information wasn't there, but because viewed through our human perspective and forced to fit into our way of thinking, it made no sense at all. If you want gun battles and explosions, this book is not for you. But I find it intrigueing and interesting, and it sets the stage for the books that come afterwards, which I find even more so.

10 points for the audiobook production, 8 points for story, for 9 overall.
Posted by Mike's Woodwork By Design at 7:27 AM No comments: