These are the wheels I have up on ebay for sale
My dad gave them to me to save for the road bike I'm saving up for. The thing is, the bike I'm saving up for already has equivalent wheels. He upgraded his, not because there was anything wrong with these, so much as because a salesperson convinced him. As for mileage, he has done one century ride, and he worked up to it for about six months at about 60-100 miles per week.
The wheels are straight and true, and they look new to me.
The details:

- Hubs are perfect and smooth.

- The rims are STRAIGHT.

Posted by Mike's Woodwork By Design at 6:33 AM No comments: 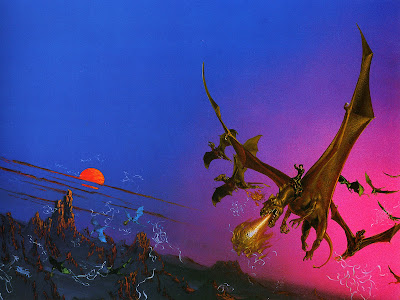 This book also reminded me of what I don't like about these books - dragonriders are telepathically linked to animals, which gets a little weird when it comes time for the animals to mate. The result is that dragonriders don't have the same constraints about their sex lives, and there's more discussed and portrayed than I'm comfortable with in this book. No, you're not going to get your kicks off of it, but I wouldn't want my kids reading it until they're mature, and even then I wouldn't recommend it. Sorry to say that I give this one a thumbs down.
Posted by Mike's Woodwork By Design at 8:19 AM No comments: