The Twilight Series, by Stephenie Meyer 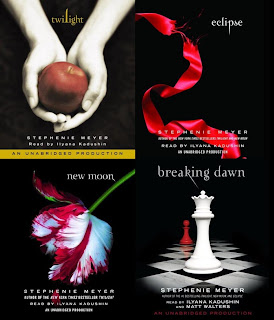 The Twilight Series by Stephenie Meyer, read by Ilyana Kadushin, has become known for obsessive teenage girl fans, which I think has left it with a bit of a stigma especially among male readers who like the fantasy genre. Here's the thing though: I read this series and I don't even wear pink. Truth of the matter is, there's enough death dismemberment, mythical creatures, evil schemes, lust (whether for blood or body) and enough hot vampire women that no guy needs to feel ashamed for reading or listening to the series. I actually quite enjoyed it. As far as audiobooks go, Ilyana Kadushin does, I think, a really good job. Holding her up to the Jim Dale/Harry Potter standard as a 10, I'd give these audiobooks an 8 or maybe even a 9.

I've heard some criticism of the books, due to sexual content and its appropriateness for teenage readers. Nevermind that Stephenie Meyer has said that teenage readers were not her target audience in the first place. In any case, these books are definitely for an older audience than the Harry Potter series, despite being available through Audible Kids. Personally, I thought the sexuality of the books was not anything that I had to feel guilty for reading, being a married man. However, if I had read it think as an early teen boy it may have given me too much information. It is hard to say where in between things become appropriate. There is no premarital sex in the books, and the intimacy between married couples, with the exception of one line that I thought was too much information, was handled by leading up to the scene and then cutting out giving the couple their privacy, and then picking up the next morning. I thought it was tasteful and appropriate.

So here's a book-by-book review:

Book 1 - Twilight:
Book 1 covers the discovery and initial falling in love phase, and then brings in danger into the end of the books that becomes the central threat to Bella's existence for the following two books. The criticizm I've heard the most is that Edward is too stoic and perfect, no sense of humor, etc. I disagree - I think that because the book is written from the first person perspective from Bella's side, he seems perfect because to her he is. I like Edward. The relationship isn't too sappy for me to feel comfortable reading about it, and the blood lust-self denial I think makes the story that much more loaded - more than just the typical teenage sexual tension for kids who try to remain chaste despite feelings of attraction for those they date. The end of the book has some nice action, but it left me wanting more - so much of the action happens while Bella is unconscious or somewhere else and because of the first person narration you don't get to "see" it happen. Looks like the Twilight movie may overcome that weekness and I'm looking forward to it. As far as adult content goes, no worries - they kiss and feel passionate about it, and that's about all.

Book 2 - New Moon
New Moon by Stephenie Meyer starts and ends well. I don't really like the middle. It's kind of the Empire Strikes Back or Order of the Phoenix of the series, I guess, meaning that it's an unhappy time in the main character's life, so the story isn't as pleasant. As the author puts it, it's the darkest time in Bella's life, just like a new moon gives the darkest nights of the month. There are some redeeming features though. Jacob is introduced as a friend in Bella's life, and I like Jacob. He's not the perfect man to Bella, so his character through her eyes, and thus in the book, seems more flawed, and he's entertaining. There's a little action/tension interspersed through the book - people showing up dead and giant wolves roaming the woods, but not enough to keep it moving fast. For the most part, Bella mopes. The book ends with some pretty tense stuff, but not really any action. Yeah, it's my least favorite of the series, mostly because nobody really gets torn apart and burned, eaten, bludgeoned, or seriously injured. Still, hot vampire chick driving a Porshe is kind of fun if you want. Mostly this book bridges the gap between Twilight and book 3, Eclipse) Again, no real worries as far as adult content is concerned.

Book 3: Eclipse
Eclipse by Stephenie Meyer is the Return of the Jedi of the series. You've still got the same person causing problems that was causing problems in the 2nd book, and you have that figured out long before the characters do so it kind of drives you nuts while you wait for everyone to get a clue. The adventure tension comes between rival groups of mythical creatures and a main character who wants them to get along so she can go on toying with the emotions of men in each group. OK so Bella is a selfish moping teenager still, but that's not quite so central as it is in the last book. The romance storyline in this one is interesting again, as both Jacob and Edward have to compete for Bella, and she has to choose between them, which she puts off and puts off till someone has to get hurt bad. Did I just say I liked the romance story line? Maybe I should start wearing pink. Really though, like I said, there's enough other stuff including dismemberment, mini wars between mythical creatures, etc. to make the romance pill not so hard to swallow. And I think that's why I like the book so much - it builds to a really cool action scene in the end of the book. Again, the first person aspect means you hear about a lot of it after the fact, but a smaller and more intense fight happens in front of Bella while she's conscious this time, so it's pretty cool. As far as adult content goes, though, Bella decides she wants to get it on with Edward, who himself says he wants to wait till marriage for moral reasons, so not quite so safe for your teen kids.

Book 4 - Breaking Dawn
Breaking Dawn by Stephenie Meyer gets the prize from me as the best of the series. My wife and her sister like it the least. I think this is probably entirely because of gender differences and preferences in genre - I like fantasy and scifi, while Liz likes historical fiction and contemporary relationship stories. Once Bella and Edward are married, you're past the dating/falling-in-love storyline that is necessary to keep romance stories going. Also In this book, it's hard to keep any grasp on the contemporary romance genre - it was hard in the first books as Bella is attracted to vampires and werewolves, but they all lead normal looking lives around normal people. Well, this book is spent almost entirely around the supernatural crowd, and breaks away from the Bella-only perspective, showing from Jacob's eyes what it's like to be a werewolf. It introduces lots of other vampires with different superpowers. It's more like X-men who have sex off camera - a lot. There's definitely content in this one I wouldn't want my kids reading till they're mature and have a handle on their sexuality. I thought it was handled tastefully and appropriately - didn't feel any need to repent after reading it - but my wife thought the newlywed sex focus got a little old. Again, probably gender differences :)...ANYWAY there are some big twists in this book that I though were awesome - ripped it away from the contemporary romance genre entirely and threw it completely into the Fantasy/Scifi world, which is really why I like it more. My only complaint is the ending. Imagine if, after taking over the Ministry of Magic and surrounding Hogwarts, Voldemort had called a truce with Harry because he might not win after all...I wish people would have fought it out - sure a few good guys would have died, but it would have been awesome, especially with Bella's newly discovered superpowers...

Anyway, there you go. I like the series, quite a lot, and enjoy the Audiobooks, but use parental discretion before having your kids read or listen to it.
Posted by Mike's Woodwork By Design at 6:37 AM