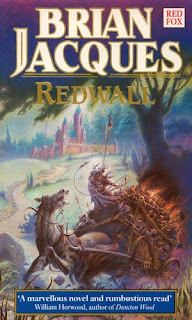 I've listened to this a couple of times, and read one of the other books in the series. Honestly, it's not my favorite. It's set in a world where animals act like humans, like Wind in the Willows, though unlike most fantasy books, it doesn't really have magic of any sort in it, or mythical creatures or anything. But that's not a plus or a minus. For me, it's just not that engaging to read it. The characters aren't that interesting. The plot, though fun, is not very interwoven like the Harry Potter books, but is more a series of adventures and action scenes. Basically, despite the adult-sized text and thickness of the book, the story is geared toward younger readers - 5-7 grade or so. My son in 5th grade LOVES the series. For him, it's a lot of fun. He's not so interested in things like round characters, character development, allegory, or thought provoking storyline, which you can find in books like the Harry Potter series or Chronicles of Narnia, for example, which, though written for younger readers, are engaging for adult readers as well.

The audio production is great - Brian Jaques himself does much of the narration, and there are actors and voices that make it a lot of fun as far as that is concerned, but it doesn't quite make up, in my opinion, for the plain and simple storyline. It's basically a kids book that doesn't cross over into adult levels of interest, and I find myself feeling like it's a chore to listen to it in-between more favored titles to avoid over-listening to them. Sorry, Brian Jaques.
Posted by Mike's Woodwork By Design at 11:07 AM