The Fire of the Covenant, by Gerald N. Lund 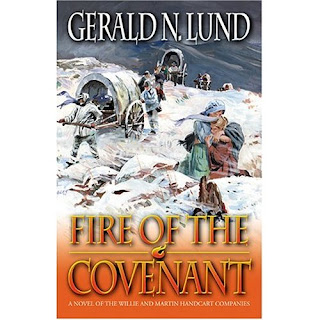 Just warning you before you get started: this book is not easy to read. If you've read the Work and the Glory series, also by Gerald Lund, then you know his style of historical fiction - to create a small number of fictional characters and then to place them in the middle of all the historical events that happen, and to do so with detail and realism that makes you feel like your best friends were there going through it while you looked on. That is true of this book as well, only the events that unfold are not pleasant, not pretty. The story has been described as the worst tragedy of the settling of the west, which I guess is up for debate, but as you go through the book and get to know these people, and then walk with them as they die of exposure to the cold, the whole time having faith that they're doing the will of the Lord, it's really tough.

I listened to this about a year ago, and didn't have the heart to listen to it again, though it was very very good, till just recently. I think the second time is harder than the first, since you know going into it which characters don't make it through. The parts that shake me up the most are two - one where the company has to continue on despite the fact that a 7-year old boy is missing, and the dad stays back to search the plains for his son while the wife and the rest of the family moves on with the handcart company, and two - as a six year old boy freezes to death while riding piggy back on a man's back as they hike through the cold. I can't help but picture my boys' faces who are the same age as these people. I had hoped that these were the fictional characters, but they weren't. And they seem so real. It drives home the lessons that the Prophet, Joseph Smith Jr. taught about trials and sacrafice:

"You will have all kinds of trials to pass through. And it is quite as necessary for you to be tried as it was for Abraham and other men of God, and (said he) God will feel after you, and He will take hold of you and wrench your very heart strings, and if you cannot stand it you will not be fit for an inheritance in the Celestial Kingdom of God", and " a religion that does not require the sacrifice of all things never has power sufficient to produce the faith necessary unto life and salvation."
It makes me think - could I do it? Can I do it? What will my tests be? and do I have what it takes to pass? It's very, very humbling to me. I guess that's the point Gerald Lund wanted to drive home.
So, not that it has to be said, but excellent book, and the audiobook production of it is very good. It's hard to rate it up there with the fantasy books and scifi books that I read for entertainment only becasue it runs so much deeper, but if you're up for it, it's an excellent story that reaches into your heart in very personal ways if you let it. I think I need some more light-hearted fantasy now though.
Posted by Mike's Woodwork By Design at 7:31 PM

One of my all time favorites too, but I cry through the entire thing. I've read it 3 times and listened to it twice I think and it kills me every time. And I have ancestors that were there. They went through so much for us.