The Prophet of Yonwood, by Jeanne DuPrau 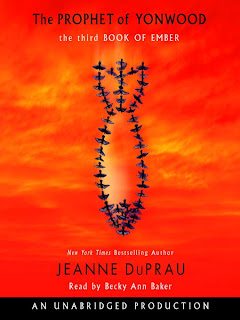 This book is a prequel to the City of Ember and the People of Sparks, though written afterwards. Honestly, I found the story to be a disappointment. It starts out looking as if it were to deal directly with the events that led the people to take refuge underground. Clues are given, things happen that seem important, and then they're dropped. Then it spends the rest of the book focusing on the events of a little town called Yonwod where a girl had a vision of the destruction of the world and the religious zealots in the town take advantage of it to promote their agenda. The story was OK, not great. Then in the afterword it deals more with the process of getting people to Ember and getting the world destroyed - the clues are picked up, explained, and resolved and it's all over. It left me feeling like the book that should have been written was missed and instead we have this less interesting story about a religions zealot and the town she opresses, and the girl who saves the town.
I don't see an anti-religion message so much as a use-your-brain-about-it message, which I think is great and all, but the story just wasn't worth the trouble in my opinion.
Thankfully this one is read by a different woman from the City of Ember and the People of Sparks. The reader does a fine job and doesn't detract from the story like the reader of the first two books. No objections there. I'd give the story 3 out of 10, the reading 7 out of ten, for a generally lackluster audiobook.
Posted by Mike's Woodwork By Design at 10:55 AM